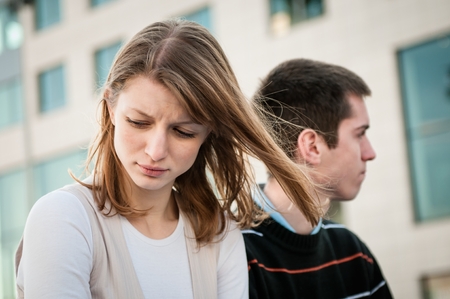 Don’t let this happen to you! My friend and neighbor Jimmy rang my bell some time back and was in tears. His wife, and mother of his children had just told him that she wanted to separate. He was shocked because he hadn’t imagined that she was so unhappy in the marriage.

“Baby”, he said, “What’s wrong? Whatever it is I’m sure we can work it out. I’ll ask our friend Eli if he could recommend a couples’ counselor.” Her response was firm. “The problem Jimmy is that I can’t stand looking at you face another minute.” Truth is there were some explicatives in her remark, but you get the idea that she had had it; she was done and was not turning back.

I wish that I could say that this was a unique story, but I’ve heard it before. Another friend of mine only found out about his wife’s complaints about him in the divorce papers! He was not particularly aggressive in his career, while she was. As far as he knew they had had a happy arrangement in which she was the major breadwinner and he contributed some to the family income. It had never been mentioned that she resented working so hard, and wanted him to contribute more to the family’s income.

While these examples are fairly extreme, they illustrate one of the most basic problems that couples encounter and can put a relationship into danger of falling apart. Specifically, that is poor communication which can undermine the most loving relationships.

Ironically some of the very things that people do hoping to improve a relationship, backfire. There may be lots of things that they feel or think about, but never utter because they worry about hurting their partner’s feelings, or don’t want to get into an argument. Or perhaps even more common, one or both of you feels dissatisfied but can’t quite put your finger on what is bothering you.

Perhaps the most common sign that you would benefit from couples’ counseling is the experience that you’re getting into arguments with your partner over “stupid things.”

People frequently come in saying that they’ve been arguing but they both agree that the argument seems to be over something trivial, yet the feelings were strong. This almost always indicates that the couple is either not aware of what is actually bothering them, or if they do have some awareness of what is bothering them, they haven’t found a way to express it.

This is essentially a communication problem.

A skilled couple’s therapist can guide you through this by helping you open the lines of communication and sharing your feelings with your partner. In fact, it almost always winds up being a huge relief to both partners.
I recently worked with a couple who constantly argued about their dog. He had more available time than she did and would frequently take the dog on errands with him. The dog apparently quite adorable, was always attracting people’s attention. They both agreed that the dog needed lots of exercise, but it would just infuriate her to hear about or see on Facebook posts of her partner out with the dog.

The arguments would usually go along the lines of her saying that he knows that she is going to take the dog out for an hour long walk when she gets home, so he didn’t have to take the dog with him on errands. This was in spite of the fact that that they both agreed that the dog needed a lot of exercise, and his taking the dog out was certainly doing the dog no harm. They both agreed that this was probably a “stupid argument” but they would repeatedly go there as if pushed by an unseen hand.

The problem was essentially that neither could identify what they were “really” arguing about.

In couple’s therapy, we did a series of exercises that allowed each of them to get closer to what they were feeling. Of course it had nothing to do with the dog. He was quite gregarious, and she fairly private. The image of him walking around town and getting into conversations with people left her feeling vulnerable and exposed. Once this was clear it became much easier for the couple to work directly with their feelings, and not surprisingly, they stopped arguing about the dog.
A close cousin to arguing about “stupid things” this is the feeling: I get mad (he gets mad) for no good reason.

Again there are arguments about things both consider trivial, yet the arguments can be intense. They seem sometimes to “pop up out of nowhere.” This too is an indication that there has been a breakdown of true communication, and it would be wise to consult a couples’ therapist.

“We don’t seem to enjoy our time together” or the feeling that, “our usual activities no longer seem to give us pleasure” are signs that something has gone amiss in the relationship, but the couple doesn’t seem to be in a position to identify what the problem is. Instead, they continue to try to do the things that they have loved doing together in the past, but get the feeling that it no longer gives them joy.

With a competent couples’ therapist, the couple is able to figure out, and address what in fact seems to be troubling them and starts to work on it directly.

Finally, and this to me is the saddest situation I tend to come across in my practice, a couple comes in and reports that they just no longer seem to enjoy each other’s company and do not look forward to seeing each other. To me, this is an indication that the couple has waited a very long time before seeking the help of a couples’ counselor. Usually at this point the couple tells me that they don’t feel they can go on like this, but rather than separate they what to figure out how to make things better.

My advice to you is to be encouraged. It can be done. The truth is, had you taken action earlier, there may have been less to do, but all hope is not lost provided you take action now.
In short, notice the signs early that couples’ counseling may be helpful. And don’t be shy about making the phone call to the therapist. My experience has been that couples who intervene early, have much less to disentangle before going on to develop the tools they require to have a mutually rewarding relationship.

If you’re ready, reach out to me so we can speak on the phone about how we might be able to work together. If you’re in the NYC metro, you can reach me directly at 212-242-2219 to talk about a personal appointment to work on your marriage.